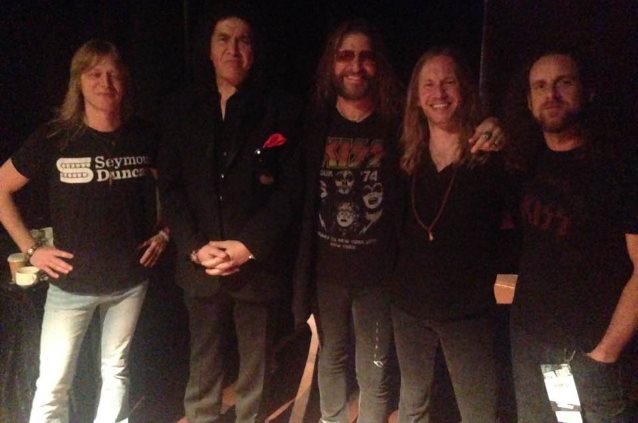 KISS bassist Gene Simmons will kick off his first-ever solo tour on March 18 at the Agora in Cleveland, Ohio as part of Wizard World Comic Con.

On March 2, Simmons and his solo band played a corporate event, and video footage of the gig has been uploaded to Facebook. Check it out below.

“This is gonna be a first for me,” Simmons told CantonRep.com about playing his own shows. “Outside of KISS, I’ve never done a solo tour. I never did anything like that. Every once in a while I’ll jump up on stage and do a song with somebody. Johnny Depp and I did a few songs together, a few other knuckleheads, but that’s about it. When Wizard World and I agreed to do five events together, the idea of jumping up onstage and gulping it on for an hour or so came up. And I got a great bunch of guys, real rocking guys who are gonna get up with me, and we’ll play all the hits and have ourselves a good old time.”

Simmons will perform “An Evening With Gene Simmons And His Band” and attend five Wizard World Comic Con events as an iconic star attraction in 2017. The club venue concerts are in conjunction with appearances at conventions in Cleveland (March 18-19), St. Louis (April 8-9), Philadelphia (June 2-3), Chicago (August 26-27) and Austin (November 17-18).

Evening concerts are planned on Friday in each of the respective cities, with Simmons on hand each Saturday to greet fans, pose for photo ops, sign autographs and conduct live interactive question-and-answer sessions at each Wizard World Comic Con.

Simmons said in an interview last week that he was still working on his box set that will include “150 songs that have never been released. That news is gonna be released soon.”